The tears carried with it my fears, anxieties and anger that bottled up inside me days after that fateful day when Yolanda ravaged the only place I knew to be home. Some of the passengers beside me were crying silently and when we looked each other, we understood – we finally found refuge.

Rewind to months before November 8: The Eastern Visayas Federation for IT (EVFIT), of which I was the public relations contact person, was busy hammering out every plan we could come up with to promote Eastern Visayas – Tacloban and Palo, Leyte in particular – as the next ICT-BPM destination in the Visayas. Underlining the urgency was the fact that we had more developed counterparts who were already known on a global basis as ideal destinations across the globe. Modesty aside, we were able to send the word out since the day we committed in August 2012 to make a go for it in the big league. NICP was kind enough to let us participate in their activities even though we were not formally considered as members yet. We started building relationships with schools, colleges and universities as well as with the local government and other possible champions. We participated in every forum where we were invited, even if it meant us explaining ad nauseam that our industry did not just deal with internet shops. 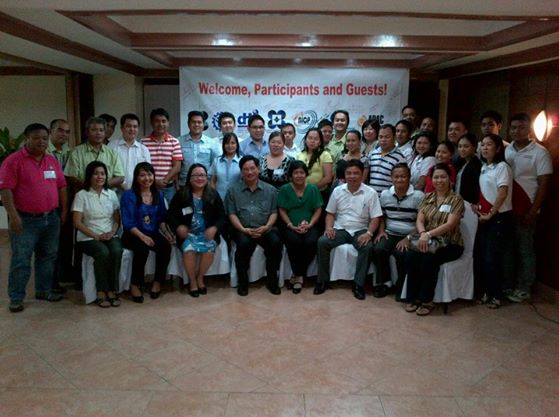 The The Eastern Visayas Federation for IT (EVFIT)

A huge opportunity to promote ourselves came in the form of the ICT-BPM Roadshow sponsored by the ICT Office of DOST along with other industry organizations. Initially we were worried that we will not be able to meet the expectations for the event. It entailed lots of coordination, pulling of resources and a lot of negotiations. To make the long story short, everything went well and as a matter of fact, we were able to gather 5,000 participants for the two-day event – a feat that was considered to be impossible until then. We were very happy because a bigger audience finally understood what we were talking all along for the longest time – ICT-BPM was here to stay to make a difference in Eastern Visayas. The cherry on top was the formal declaration of Tacloban-Leyte as one of the Philippines’ Next Wave Cities. That marshaled a new wave of energy for the EVFIT Team. And as if things were not enough for us, due to the gentle but firm prodding of mentors like Boni Belen, EVFIT was able to satisfy the criteria as a Level 2 ICT Council. EVFIT was now in the boarding area of the ICT-BPM industry – ready to take off, waiting for the control tower’s clearance. Then came Yolanda.

We first heard about her on November 4. Being the site business continuity coordinator of Expert Global Solutions-Leyte at that time, I was only a bit flustered with the news that it was a potentially Signal No. 4 storm. Years of typhoon ravaging have made Waraynons extremely resilient and sturdy in the face of storms. We set in place the necessary preparations along with other companies in the community. People casually talked about it and were confident they will be able to ride it out. This was not to say we did not appreciate the potential danger or that there was no sense of urgency – we were just buoyed by years of collective sense of readiness and courage. At home, I asked my brother and aunt to double-check our resources and prepare the customary “emergency kit” if we had to leave for a safer place. All of my office mates, friends and neighbors went on with their daily routine until the early morning of Friday, November 8.

At the office where I held fort along with the EGS Leyte management team, Yolanda arrived like a thief. All of a sudden strong gusts of wind battered the site. The concrete walls were shaking, the ceiling started to creak and fall and the glass windows and walls shattered. Our company vehicle (a Toyota Fortuner) was violently rocking left and right, front and back until it moved backward all of a sudden – shattering the reception desk made of granite. All of us were shouting and scampering to safety. In my case, I hid under the concrete stairs with our project director (an American) and her dog. For more than two hours, we hugged each other and cried. At one point, I decided that I was going to die while the howling winds punched our site. We could hear the cries of the other employees but being drowned out by the insidious howling. Hours later, the storm passed.

We were not prepared for the sight that greeted us when we went to the streets shortly after noon time. There was destruction, chaos and confusion everywhere. People were either sifting through the debris or carrying their dead. We had to calm our employees while trying to find a way to send the word to our Manila office. At the back of our heads we were thinking about our families. We learned later on, from the head of the Leyte RRDMC, that their satellite phones were dead and that thousands died near the shoreline. He told us that dead bodies were either carried away to the sea or were mixed with the debris. I just closed my eyes thinking about my brother, aunt and other relatives (I only heard about them a week after Yolanda when they called from Manila, they were able to take one of the mercy flights. I was not able to go home since the roads leading to San Jose, Tacloban were filled with debris and the dead). I learned days after that our fellow NICP members were busy looking for us, trying to confirm if we were still alive. I was very grateful that they moved to act more than just as industry colleagues – they acted like family to us.

For days we witnessed scenes of utter misery and stories of despair. Tacloban and nearby places were literally wiped out. The stench of garbage and death became a familiar smell. Familiar places were shattered beyond recognition. The dead were everywhere – on the sidewalks and waiting sheds; some were still uncollected, like those whom we found hugging the concrete electric posts. Stores that held food and medicines were looted; aid did not come until more than a week later notwithstanding the fairy tales peddled in national media. The staff in Tacloban hospitals were overwhelmed by the sheer number of people needing medical attention; out of frustration, doctors and nurses had to drive many people out in tears because there were no medicines and tools. The common questions we would ask of acquaintances whom we met in the streets were: Kamusta kayo? May namatay? Ilan? Nakita na ba ang bangkay? Many street rotundas and empty lots in churches became instant burial grounds. I met some of the participants in the roadshow in the streets while looking for food and water; they asked me, Sir, paano na ngayon?May pupunta pa ba dito na BPO?

The last two questions hovered above my head as I made my way to Baybay City for refuge with my friends and their relatives. The same scenes of destruction played along the way while I tried to find answers to those last two questions, along with the million questions of my own. Days later, in the comfort of my aunt’s home in Mandaue City, I dealt with questions on purpose, meaning and direction. What happens next? When I began meeting with and talking to some of the NICP folks, giving me their assurance of support, it dawned on me that things were going to be alright after all. Personally, NICP’s presence provided me focus on what I can still do for myself. For EVFIT, it gave me the direction to continue the work we begun for Eastern Visayas. It may take time, just like wounds that need time to heal. But there is hope, and that is giving me more clarity what I and the rest of the team would like to reach for Eastern Visayas – its fulfillment as a Next Wave destination.

Kjell is a member of the Eastern Visayas Federation for IT (EVFIT) and the Administrative Support Manager-Philippine Operations of Qualfon Philippines, Inc. based in Cebu.