Next Wave Cities Move Up in Global IT-BPM Locations Ranking

Next Wave Cities Cebu and Baguio, ranked 8 and 99th respectively, kept their spots in the Tholons World Rankings, Metro Manila overtook India’s Mumbai to take the second spot in the world rankings following the city of Bangalore. A total of seven (7) Philippine cities made it to the Top 100 rankings with two (2) cities making it in the top 10.

Undersecretary Louis Casambre of the Information and Communications Technology Office of the Department of Science and Technology said that, “The goal of the Next Wave Cities Program of the DOST-ICT Office and the IT – Business Process Association of the Philippines (iBPAP) has always been to develop globally preferred outsourcing destinations outside Metro Manila.” “Our goal for 2016 is to add three more cities from the Philippines in the top 100.” Usec. Casambre added.

Next Wave Cities Program Manager, Ms. Emmy Lou Delfin said that,  “We have been getting a lot of support for the Next Wave Cities Program; from local ICT councils, local government units, the academe, to regional offices of the Department of Trade and Industry (DTI) and DOST, together with the Information Technology Business Processing Association of the Philippines (iBPAP)and we intend to maintain our efforts in bringing inclusive growth to the countryside.

The Next Wave Cities Program, a joint project of DOST-ICT Office and iBAP, promoted the industry to countryside stakeholders and students in 9 cities and provinces through the Next Wave Cities Road show last year, the last province being Rizal wherein the event spurned the re-organization of the province’s ICT Council to help develop the province’s ecosystem to support the local IT-BPM Industry. The Next Wave Cities Roadshows have been running for three (3) years and have resulted to more cities starting the own development efforts to get them ready for IT-BPM locators and more people getting better understanding of available careers in the IT-BPM industry.
About DOST-ICTO – The Information and Communications Technology Office of the Department of Science and Technology is the Philippine Government’s lead agency on ICT related matters. Its primary thrusts are in the ICT Industry Development, eGovernment, ICT policy development, Internet for all and Cybersecurity. 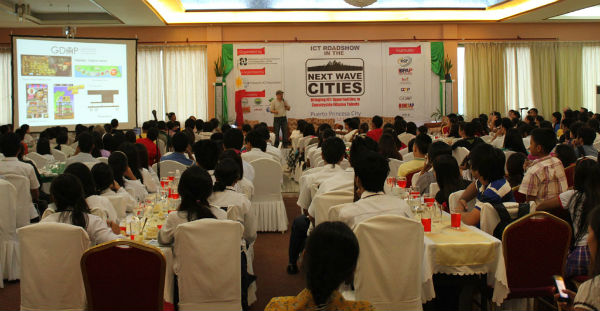 Participants at the Puerto Princessa leg of the 2013 Next Wave Cities Road Show listen to Game Developer’s Association of the Philippines (GDAP) President Alvin Juban talk about career opportunities in the game development industry.