Regional trade associations supporting call centres and business outsourcing services in the Philippines are among ABV’s in-country partners and have benefitted greatly from the probono support of IBM employees.

Since 2008, four IBM Corporate Service Corps teams, supported by ABV, have worked with three key trade associations in the cities and provinces of Cebu, Davao and Laguna.

The Philippines has become the number one call centre service provider in the world and by 2016 it is expected that almost one million people will be employed within business process outsourcing services. Furthermore, every job creates an estimated 2.5 additional jobs, generating substantial opportunities for people from middle to low income communities, along with youth, women and those differently abled.

Two CSC teams working with the trade association, ICT Davao, have helped to make the volunteer-run association a benchmark for others in the Philippines.

“In 2008, the idea of being picked as a partner of ABV was really an exciting one for us,” remembers Lizabel Holganza, President of ICT Davao. “When we heard that we were one of three groups that were going to be engaged in the IBM CSC program, it was something we really looked forward to because at the time our organisation really had huge challenges.”

Lizabel said there was the energy and drive among stakeholders to build the city’s reputation as a location for technology-enabled business outsourcing, yet the organisation, run by a volunteer committee, lacked the capacity to effectively plan. In 2008, IBM’s first CSC team worked with committee members to set the strategic direction of the association, as well as craft communications and advocacy plans.

“The outcomes from this engagement meant we were able to build very strong relationships with stakeholders and media partners. We eventually became the benchmark for other industry associations, a template for other regional cities to emulate.”

“It was a feeling of gratification and appreciation that we were able to receive expert advice from global volunteers, and we were eager to make sure that the plans we jointly created during the one month would be implemented. So when the next CSC team were assigned in 2010 we were excited to tell them what the outcomes were. And we wanted to make sure the objective that we set for the second team was something that would build on the gains of the first CSC team.”

The second team assisted the association with their branding, as well as provided strategic consulting advice on how technology could be better utilised within agribusiness and tourism in the city and on the greater island of Mindanao.

“Davao has sustained its ranking in the top 10 next wave cities, those nominated as the choice locations to bring IT work or outsourcing work. We were also in the top 30 outsourcing destinations globally as recommended by KPMG,” said Lizabel, who has since become the President of the nation-wide alliance, the National ICT Confederation of the Philippines.

In the growing city of Cebu on an island north of Mindanao, high-rise buildings tower over the humble offices of the Cebu Educational Development Foundation for IT (CEDFIT). The Foundation was the very first industry association set up in the country to support the call centre and business outsourcing providers, and to date, it is still the only association with paid staff. 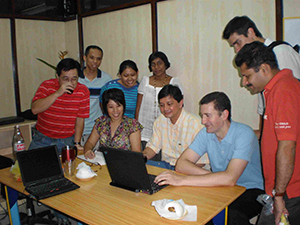 ABV first collaborated with CEDFIT in 2011, introducing the Foundation to IBM, and as a result, two members of the 10th CSC team to the Philippines worked with staff for a four-week period. “We were asked by ABV what kinds of challenges we were facing… from that input, they were able to assign CSC participants with the right kind of expertise who could help us address the challenges we were facing at the time,” said Executive Director, Wilfredo T. Sa-a Jr.

The fast growth of Cebu’s business process industry is in part due to the cooperation between universities and companies to address talent gaps, an area where CEDFIT has played a key role. “In others areas where the IBM employees helped us, that is, in membership and training, we can say that these two areas increased revenues by 20 to 30 percent. And we would like to credit the work of the CSC participants and the assistance they gave us with our new accounting and marketing systems,” said Wilfredo. “These were lasting benefits. Until now, we are still using these systems. We feel very fortunate to be involved in the CSC program.”

Most recently, a team of three IBM employees provided strategic advice to the trade association located in the Province of Laguna, south-east of Manila. The association is known as the Laguna Industry Network for Knowledge, Innovation and Technology or LINK IT. The team provided advice and expertise on plans for a new technology business incubator targeting start-ups and existing small to medium enterprises in the growing city.

In her role as President of the ICT Confederation of the Philippines, Lizabel expressed the appreciation felt by her fellow members. “It is an honour to be chosen as a sector to receive this kind of support.”

To learn more about the business process outsourcing industry in the Philippines, as well as ABV partners go to: