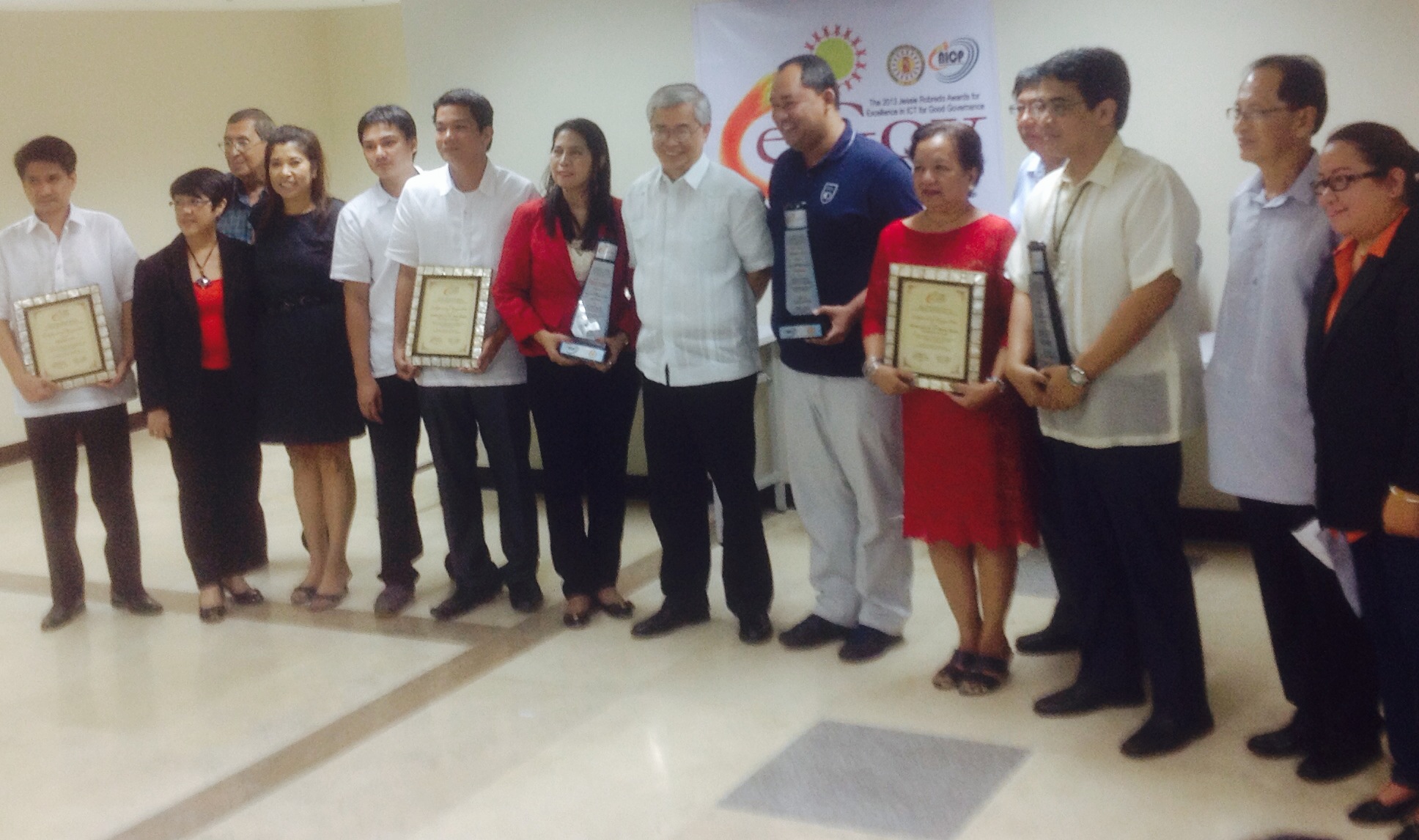 While San Fernando City, La Union bagged the first place in the Best in eGov Customer Empowerment (G2C) category with its Document Tracking System, to address the continuing predicament in the handling of communications, records and financial transactions which are considered as important assets of the institution. The system was designed to track and capture the responsiveness of the city government in its communications and financial process dealings using barcode solutions. Turn-around processing time of documents is measured and classified under simple and complex transactions as required by RA 9485 with the capability to send via network and email notifications on transactions that fail to comply with the set standards wherein external clients can receive email notifications and/or check online via the city website the status of their requests or dealings with the city government.

The awards is an annual project of the National ICT Confederation of the Philippines (NICP) and the DILG. Awarding was done last December 20 for the 2nd eGOv Awarding Ceremony or the Jesse Robredo Awards for Excellence in ICT for Good Governance at the Department of Interior Local Government National Office in Quezon City.

NICP Chair Lizabel Holganza said the annual awards system sets four criteria in the two categories, namely, innovation, sustainability of the project, relevance of the technology to the role of the local government units and the problems they face, and replicability. 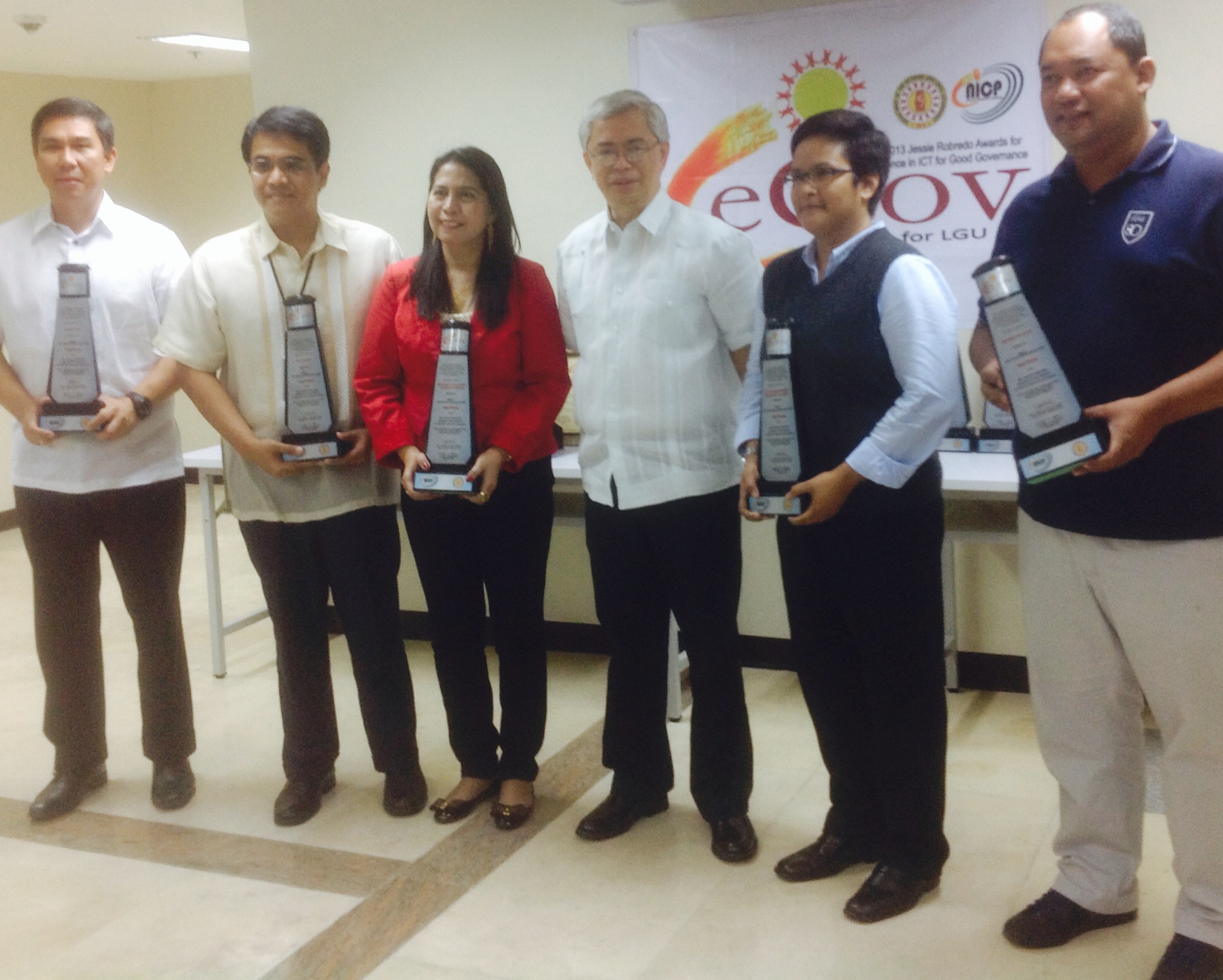 Second place for G2B is Municipality of San Simon, Pampanga which prides itself with eTax Collection3 which complements the electronic Business Processing and Licensing System (“eBPLS”) designed and custom-built to complete business permit application in less than 20 minutes. The System was developed not just to expedite business permit applications, but to guarantee accurate billing assessment and is capable of not only storing large data but also generating daily, weekly, monthly, quarterly and annual reports. Approval of billing assessment on business permit is through local area network (LAN) connection within the municipal hall. After the implementation of eTax Collections3 the Municipality realized a staggering increase in local income from P9.9 Million in 2009 to P33.1 Million in 2012, and the LGUs dependency rate to IRA decreased by 25% from external revenue sources from CY 2010 to CY 2012.

Quezon City ranked third on the G2B category with its Point of Sale (POS) entry. The Quezon City tax collection system using the Point-of-Sale (POS) machines was developed and implemented in 2002, under then mayor now Speaker Feliciano R. Belmonte, Jr. who organized in 2001 the Task Force Information Technology (TFIT) to utilize the current technology in the collection of city taxes and fees. This paved the way for a simplified and streamlined tax collection information system in Quezon City. Under the system, the official receipt for the collected real property tax and the business tax and fees were validated using the POS for a more secure transaction to minimize if not totally eliminate fraudulent receipts.

While Legazpi City and Cebu City tied on third place for the G2C category. The Legazpi BLAST Project stands for Boosting Legazpi thru Land Information for Advocacy, Sustainability and Transparency Project, provided a model of best practices in integrating and improving the processes in land administration and management in terms of efficiency, productivity and reliability. On the other hand, Cebu’s “Fix My Barangay” is an ICT project which uses  SMS text messaging,  a replicable web application software and low-cost smartphones to collect, create and analyze data feeds from city residents that would assist Cebu City Government and collaborating local and national government agencies with their day-to-day management of reported issues, faults or complaints down to the barangay level.
Out of more than a thousand local government units in the Philippines, fifteen came out with the best practices in integrating information and communications technology (ICT) to improve local governance.

The project this year is supported by the Visayas ICT Cluster of the National Industry Cluster Capacity Enhancement Program (NICCEP) under the Department of Trade and Industry (DTI) and the Japanese International Cooperation Agency (JICA), Microsoft Philippines and the Information and Communications Technology Office – Department of Science and Technology (ICTO-DOST).